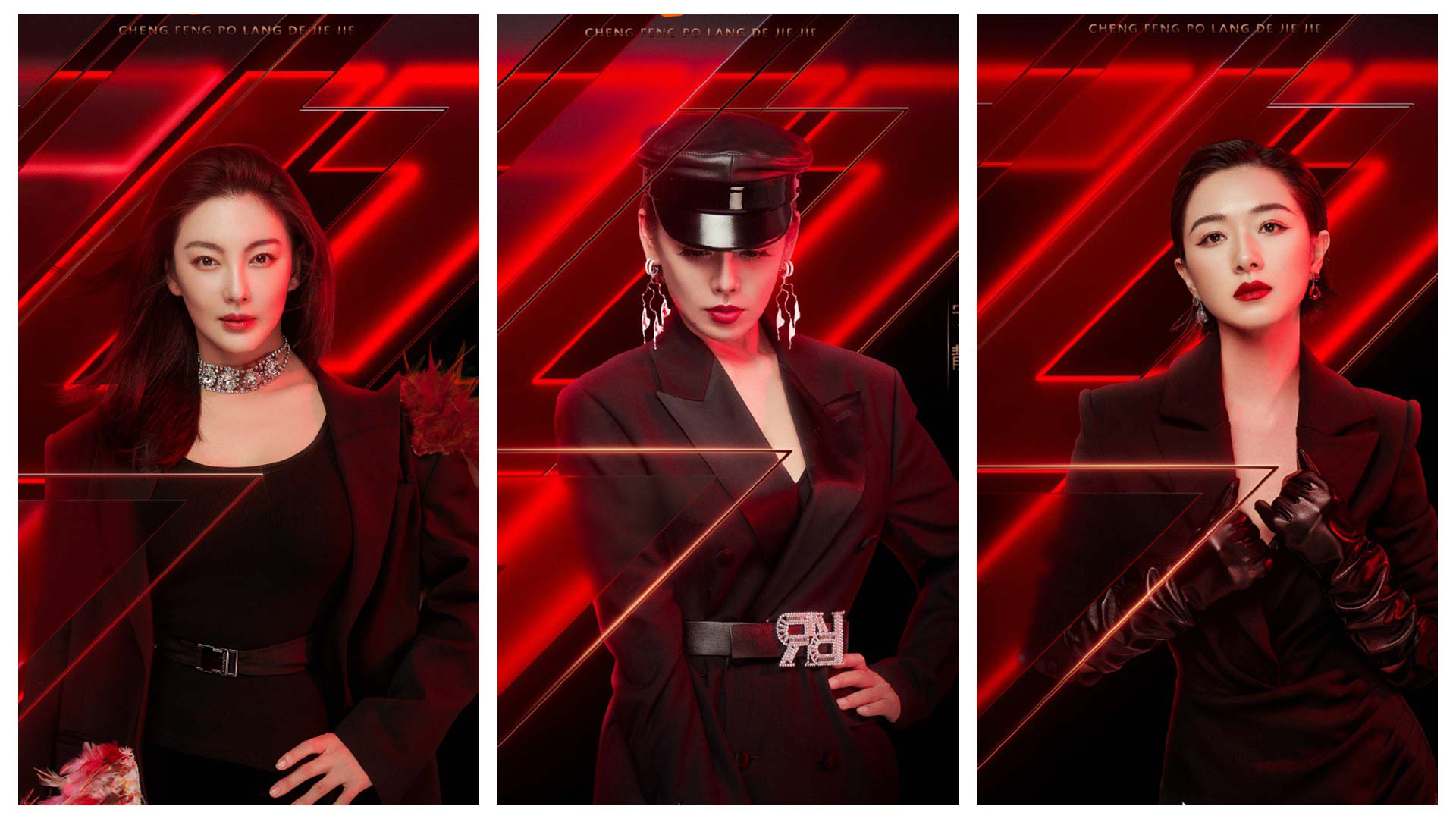 Sisters Who Makes the Waves 乘风破浪的姐姐 (Chéngfēngpòlàng de jiějiě) is a reality competition show that proved to be exceptionally popular in the Summer of 2020. Produced by Mango TV, the show is premised around thirty female contestants vying for a position to be in a newly formed girl group.

As with all popular shows looking to draw viewers to an otherwise formulaic premise, it has a twist: all the participants are famous female personalities thirty years old and up.

The show attracted wide attention precisely for this shift in competitor composition, bolstered by a desire to know what these celebrities have been up to in recent years, what they look like now and how the dynamics between the different Sisters will play out.

This marks an interesting shift when contrasted to other recent reality shows that heavily focus on the young up-and-comers like Tencent’s Produce Camp 2020 (创造营 2020) and open a metanarrative around media space being given to ‘older women’ in this format.

For this article, alongside discussions with various viewers we spoke with several academics who are researching the intersections of media, youth and societal relationships in China to provide their perspectives on the show.

“Sisters Who Make Waves seems to be a show that picks up the long-existing social tensions in Chinese society. The show is tentatively testing issues about gender equality, stereotype and social expectations”, said Dr. Chunmeizi Su, Sessional Academic at the Department of Media and Communications at The University of Sydney, Australia.

To posit Sisters is empowering would acknowledge that women who are over thirty currently are not making waves in the entertainment industry. As Dr. Eric Fu, Research Fellow at the Youth Research Center, University of Melbourne, Australia further elaborates, the “current status of Chinese entertainment media is mainly dominated by young actors and actresses (little fresh meat / 小鲜肉 / Xiǎoxiān ròu).” Dr. Chris Tan, Associate Professor of Anthropology at Nanjing University noted for many of the Sisters the show acts as a “lifeline, a chance to revitalize their careers”.

The central conceit of Sisters is the intersection of manufactured reality television, the concept of celebrity, and narratives of personal redemption. Age is the figure, but dreams are the currency. To address the theme of female empowerment through the construct of the ‘girl group’ is problematic. The real thrust of popularity came via the Sisters adaptability to new skills, their attitudes towards the show runners, and their control of the crowds.

The contestants are diverse within their backgrounds; from those who rose to fame when they were young and faded out of the spotlight – like the 2010s idols – to others who experienced career success overshadowed by public intrigue and scandal in their personal lives.

Outside of the show, the celebrities individually were atomized and perceived as out of date or out of career opportunities – known as “female stars/女明星/ nǚ míngxīng”.  As a cohort, these celebrities have been rebranded as Sisters with a shared name and collective consciousness within the wider media landscape and society.

Using the term older sisters ‘姐姐’ Jiějiě’ is no accident. On the one hand, there is an implicit connection to the meaning of ‘older sisters’ as motherly and feminine that connects them to a role within the family and home. This is contrasted with ‘older sisters’ as a label that does not objectify women by framing their value solely within the marriage market sphere, but as a term of respect and ‘closeness’ – something that has resonated with the millions of fans who have opted to use the term in hashtags and posts sharing thoughts on the show. Since the show aired, the term has been further elevated to a term of endearment for those fans towards their ‘older sisters’ on the show.

For those who viewed the show as empowering, they made the case that these Sisters mere presence helps portray complex aspects of their career and personal narratives within the social imagination and media representation. This position acknowledges there are still boundaries to celebrity-entertainment-complex and operates within those constraints to weaken them.

It’s also position suitable for producers Mango TV (Hunan Broadcasting System) – the breeding ground of the cultural-entertainment industry with a long history of broadcasting that pushes the rules; and experts in using TV shows as societal discourse.

Taking a step back, we see that these contestants themselves have been part of the entertainment world from a young age and are now in the second or third phase of their careers. In later episodes, participants reflected on their careers and offered wisdom about how to navigate the entertainment industry to their younger selves viewing.

The youngest participant in the show is 29, Jin Chen, and the eldest is Yi Nengjing who is 52. The average age of the participants is 36 and the median age is 35. There is also a disparity between those older contestants and the arc of their careers in relationship to the development of the entertainment industry in China.

Of the five participants who are above 40, Yi Nengjing is from Taiwan, Zhong Liti is from Canada, Chen Songling is from Hong Kong. Curiously, their presence of these stars at this age range also highlights the developmental transition of the entertainment industry moving from Greater China (Hong Kong, Taiwan) and Chinese diaspora towards the creation of mainland Chinese and the regional stars featured on today’s reality shows.

After reviewing the age composition of the celebrities overall, further disparity exists as producers invited far more from the ‘younger’ age over those in their 40s and up. Would an empowering show not feature more celebrities on the older age spectrum to break the mould of the normal ‘girl group’?

As Dr. Tan notes, “the contestants of Sisters, however, remain boxed in by narrow societal expectations of proper womanhood for female celebrities. They all look youthful with their svelte bodies, meticulously coiffed hairdos, and beautiful make-up that fit the entertainment’s industry exacting standards for feminine beauty”.

Dr. Fu further points out the way “in which the Sisters are being evaluated [and] unequal gender norms are internalized by Sisters and being used by them to understand and describe their relationship with each other”.

Reflected in the show is a sub-plot of suffering that exists between the contestants where their personal story and journey since they have been out of the direct spotlight is highlighted. “The ‘suffering’ is dedicated to bringing out diversities of women, in life, value and form” said, Dr. Su, further commenting “those highlighted obstacles and challenges, as well as the heavily portrayed sister, appear to be a result of crafted editing skills, aimed at creating trending topics on social media and resonating with audiences. ”Dr. Fu further states that “as for the society, the media product needs to have certain degree of social significance to make its way to the public agenda ('hot topics' 上热搜 shàng rè sōu). As political topics are difficult to navigate in China, cultural issues, such as gender discourse become a natural choice.”

Glossing over more contemptuous issues like divorces, money problems or professional rivalries, the show reinforces itself as a conduit of ‘dreams’. The pressures of replicating pop-idol routines in song and dance, the pre-performance nerves, are expressions of the challenges the sisters face to pursue their dreams: a return to recognition, an underexposed talent, success on their own terms.

After 250 million views on the first episode, the show succeeded in garnering attention, even with very little pre-announcement of its release. It sustained this intrigue throughout the series, over 230 million views are recorded on Mango TV's app for the finale.

While the 500 person voting mechanism, split between younger and older sisters in the audience only served to reinforce the age divide early-on; a comeback team within a comeback show formed towards the end of the series dramatized the core themes of dreams and redemption.

There is a growing fatigue with the constant flow of ‘little fresh meat 小鲜肉 Xiǎo xiān ròu’ and ‘little sister 妹妹 mèimei’ girl groups. They come across as superficial and not mature, especially for an audience that itself has grown to embrace more complicated ideas about life in modern China. This audience want to see the media present a reflection of their story in these new shows.

And they did. Many Post-80s women we spoke to found the familiar faces made novel through new personas and high-production performances compelling entertainment. The role a talent show can play in shifting gender norms has a limit of expectation.

In the end it is likely that we end up with empowerment via representation - demographic diversity via familiar formats (girl group survival show) from young to bring in the new generation and older contestants to appeal to the maturing audiences.

The show has another empowering effect: money. The media market recognizes the changing demographic landscape within China, that older, independent women have significant spending power. “They have the capacity to spend more money on themselves than the younger cohort…and they also tend to be the person who buys for the whole family”, said Dr. Fu. “This effort will surely be paid back by these women’s consumption of the products advertised in the show”.

The brands and categories that make their way into Sisters go from snacks through to phones and skincare. As is customary in variety shows, reality competition and other media content in East Asia now, the brands themselves appear throughout the show either as logo-heavy props like cushions, background items as other activities are taking place, or even required sustenance for the participants in the case of yoghurt brands who have battled in this season’s shows.

Of interest in thinking about this show as empowering or maintaining the status quo we have to analyze the brands that are associated with it.

Thanmelin is the main skincare brand on the show and it is primarily known for having an ‘anti-aging’ property. Other advertisers included plastic surgery clinics. The brands experienced an uptick and commercial success from audiences. But in the context of a median participant age of 35 the sponsorships do reinforce stereotypical aspects of the status-quo towards youth rather than celebrating the unique achievements, life experience or life-stage of these ‘older sisters.'

Apart from on the show itself, the Sisters independently have already tapped into their renewed equity as brand ambassadors, representing a host of different products from sparkling drinks to childhood education platforms.

Ultimately, Sisters taps into the enduring appeal of celebrity culture, bringing familiar faces into a format that is proven to be commercially successful: inter-personal journeys within a societal narrative, packaged as IP in development (the formation of a girl group and adjacent branding).

The show moves seamlessly between the buzz that the celeb contestants create with their attendance and the familiarity of the format of these Sisters forming a ‘girl group’. It neither objectifies them more or less as women, nor does it empower them more or less. Balancing between these two perspectives, it then exists as a means to ‘empower the status-quo’.

As Dr. Su points out, “this show could probably be the (one and only) high-reel moment for our ‘Sisters’, which leaves us to contemplate on the real question here: will the show become a pioneer or rather, a fleeting excitement?”